CLONYC 35 commenced with a special guests, long time Wine Advocate critic who now covers Napa Valley wines, Antonio Galloni.
It was great meeting Antonio. He’s an interesting guy and a great conversationalist who is friendly and knowledgeable in his field and a true aficionado of Napa Cabs. There were times where you could hear a pin drop as the groups attention was all on him. A big thank you for those Schraders and Tognis as well. Today, all I want to drink is watered down orange juice.


Another great night for Cab-dome.

1995 Staglin Cabernet Sauvignon – Pretty with some hints of cedar. I also got some steamed meats? Mouthfeel graceful and refined. The group had this as its number 1 with 11 votes. I wish it was slightly more fragrant. 91

1995 Lewis Reserve Cabernet Sauvignon-Still very youthful with some headt black fruits and a slightly elevated acidity level. Tannins still showing youth as well. Maybe on its own, this would have been more pleasing. 89

Togni flight
Ok, so I have not had the greatest love for Togni Cabs. Maybe it’s me and my non-ability to be patient. Hiding wines under large piles has not been my strength. The way these two showed this evening proves how much I can still learn. (re-learn?)

1994 Philip Togni Cabernet Sauvignon –A wonderful red/black fruit profile with nice balance and freshness. A study in well stored wine for sure, this is just a bit rustic around the edges and sitting next to its younger sibling paled slightly, but make no mistake, a brilliant showing nonetheless. 92

1997 Philip Togni Cabernet Sauvignon- What a beautiful wine. Black fruit , pure and well resolved, this shows amazing youth and freshness as well. I like the midpalate on this as it was perfectly balanced and precise. Finish was long and true. What a treat. 95

A 1999 and a pair of 2001s Flight
1999 Vérité La Joie- Sonoma in the house. Cooler climate style with a more in your face approach. I thought this had some Cab Franc in the mix, and it could as I have not checked but thought more proprietary red than a pure Cab. Bright red fruits with a raised midpalate and acidity to match. Cassis and cola sums it up. Tannins seemed nicely resolved and a bit angular. Interesting wine. 90

2001 Bond Vecina- What a pretty wine. Elegant with dark blackberry, black cherry and cardamom. Finessful with a nice quiet purity. This would have been enough had not the 2001 Abreu Madrona been poured next…..93

2001 Abreu Madrona Cabernet Sauvignon- Wonderful aromatics with a pure red/black fruit profile, this has a wonderful lilty mouth feel and impeccable balance that screams breed and class. This is just beautiful. Long, precise and pleasing, especially when I get rid of my dirty glass. Before so I was a bit dismayed until I found I was the lone wolf. Wow, what a treat. 95

A mixed bag Flight
2007 Vice Versa Cabernet Sauvignon "VICE" To-Kalon Vineyard- having never heard of this wine, I was very interested to get a look-see. This was weird. Not sure what to make of it. It was slightly off target varietally and a bit cloying in the middle. Someone said Zinfandel. Maybe it’s the ‘crappy vintage’ (), but I would not mind trying another from a less ‘heralded’ vintage given the chance. 86

2007 Corra Cabernet Sauvignon- being true to form in my little mind and keeping somewhat consistent with myself, I have never been a fan of Celia’s wines. Sorry.

This was extraction and heat with a hollowness that made many scratch their heads.
I will say no more. 87

2010 Maybach Materium Cabernet Sauvignon- Thanks to Chris for sending me this out for this dinner as I knew there was a slight ‘bump in the road’ in Antonio’s WA scores/notes last month. (Me thinks that review was based on off bottles). This showed some popcorn initially but really evolved into a pure powerhouse with tons of potential. Having spent mere minutes in its bottle, some years would help. I may go on the limb and say its one of the best Materiums I have had at this young stage of its life. I may put it in the company of the 2006 and 2009. Just having a phenomenal 2004 a few months back tells me to be patient and rewards will come. That one bottle insured me trying on patience again in my ‘advanced’ years.
Blue-black fruits with creamy midpalate and long finish. An easy WOTF for me 93+

8 votes for the Materium, 2 for the Vice and one for the Corra. Oh yeah, one abstention and it’s from the guy who brought the Toscana blind wine, what the hell does Nano know anyway?

2000 Quilceda Creek – hmmm. Un-memorable, dump. In keeping with my night's mantra of 'dumping everything below 96 points', this was an easy decision
And that’s my story and I am sticking to it.

Schrader/TRB flight
2006 Schrader T6- Holy-moly, this is spot on tonight. Pretty red-black fruits of red cherry and cassis with cardamom, camphor and worn leather. Slightly boisterous, this gets your attention and does not let go. Pure, intense and fragrant with a medium weight mouth feel. Tannins still large, this super structure wine is just awesome. Long pure and fruit filled finish. I have run out of words. Here are some numbers: 95

2007 Schrader T6- I maintain my dislike for the style of this vintage. This showed tremendous promise in the nose but once on the palate any sense of bones is just non existent. Lacking is acidity, I understand the pleasing aspect of these, but like some New Age music I am always left wanting more. 90

2009 Rivers-Marie Corona Vineyard cabernet Sauvignon- Most of tonight wines were popped and poured. I know the Maybach had a 6 hour slow-ox. This wine could use a day--- Really. It’s got so much going on that it’s akin to a large symphony playing Mozart with each section slightly out of key. You can sense the music’s greatness, just not witnessing it. Black fruits with large bones and deep core of iron, this must rest. I may be in the minority here, but that’s how I see it. In 5 years I will happily take your emails stating me a genius. No need to write otherwise …….92 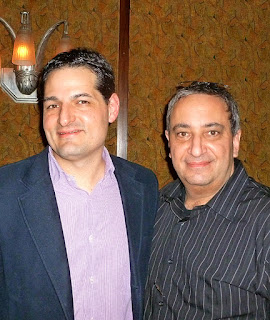 Great blog with a great information, I really like your blog. So far, I have read only this one post, but I like it, no advertising, just a story, very nice, I know I'm going to like reading all of it, over time.
Regards, cabs in hyderabad