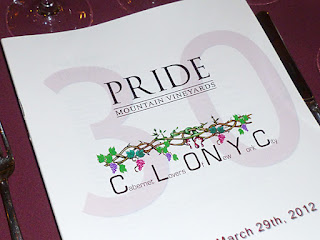 CLONYC Thirty goes into the books as a huge success--- huge.
Steve Pride ventured east to meet with a very eager and excited group, bringing with him a boatload of wine. We approached this one slightly different: we had a mini vertical of Reserves, a flight of Merlots and Cabernets from the same vintage respectively. (2007 for the Merlots, and 2005 for the Cabernets). These flights were bookended with some pretty tasty whites: A Chardonnay up front and a dessert wine, Mistelle de Viognier taking up the rear. As usual, the food was spot on and service truly fantastic. Our little private room always lends to some lively discussion. Steve is an awesome guy whose passion for the family business, and especially wine is obvious from first greeting. Thank you, Steve for your generosity and company. All in all a great night was had by all.

We started the night with the 2010 Pride Mountain Vineyard Chardonnay. A beautiful wine that has perfect balance with hints of cream. Sexy and fragrant, I don’t remember tasting a Chardonnay from pride quite like it. 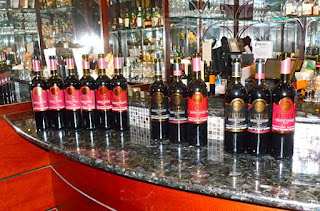 1997 Pride Mountain Vineyards Reserve Cabernet Sauvignon- Once opened and sampled 3 hour earlier, Steve mentioned that he was worried this was showing its age. Let me tell you: It certainly did not seem like that once we got to it. It was all black fruits with a finely delineated lush light to mid-weight mouth-feel that just said elegance and breed. I found hints of cocoa, cola, graphite and more. It was simply beautiful. The problem with being beautiful and in the number 1 position sets you up to want to make it a sort of yardstick going forward; wait until we get to the 1999. This has 4% PV in it. Great balance and long finish. 93 points

1999 Pride Mountain Vineyards Reserve Cabernet Sauvignon- I love to see my friends reaction when I shock them in my likes/dislikes; once the word went around that this was ‘very Bordeaux-like’, I can sense the snickers and silent thought of ‘he won’t like it, Mikey hates everything’. Wrong. I love this! It has a subdued sweet note that really caught my attention. This wine is exact and refined with notes of cedar, leather and tar. I sensed some graphite as well. 2% PV in here. Balance impeccable and just slightly more structured than the 1997 with certain family re semblance, it rocked. Long, elegant, precise, and deft. Yes please! 94 points

2001 Pride Mountain Vineyards Reserve Cabernet Sauvignon- if ever a wine I wanted to like more, this is it: I have heard it was quite the star. I have had this once with slightly better notes. The nose seemed slightly over-ripe. Palate showed some great black cassis, black cherry and a tinge of crème de cassis. As it sat it went slightly redder. I check a few other guests’ glasses; they all seemed to have the over-ripe nose thing. It got 6 first place votes so as usual, what the hell do I know? 90 points

2003 Pride Mountain Vineyards Reserve Cabernet Sauvignon- I believe this particular wine is one of the stars in this vintage. I have had it no less than 4 times and just always rocks. The nose may tell you it’s from 2008; it had some creamy vanilla notes that seemed almost primary, but once on the palate the party started big-time; Black cassis with an almost gobby black cherry (gobby good here). Dense and almost chewy, this had pure cherry cola, pomegranate and more. As it sat it just kept releasing more ’stuff’--- good ‘stuff’. This was balanced with a medium weight mouth-feel and lively acidity and length. Oohs and aahs all around. 94 points

The next flight had the 2008 and the 2009 Cab Reserves. I for one like the direction the new winemaker, Sally Johnson has gone with this label. I love watching the guests scurry to their smart-phones and go ordering wine, as they are sitting there tasting the wine as happened with the 2008. 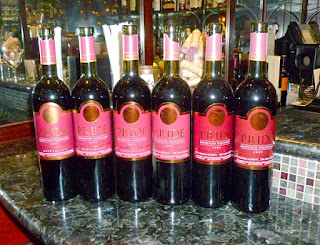 2008 Pride Mountain Vineyards Reserve Cabernet Sauvignon- The nose was similar to the 2003. Here’s where they parted company: fresh, lively and lilt in approach, these say delish right of the bat. Black and dark with an undercurrent of sweet vanilla and cocoa powder. Infused black fruits land on your tongue and we are no longer in Kansas. Simply deft and gorgeous. The purity in mind numbing. A high wire balancing act of acidity with a tannic backbone to go the distance. If you open this now you must give it a few hours airtime; all the difference on these. This was elegant and structured all at once. Intense and long finish keeping the fruits lively. Love it. 95 points

2009 Pride Mountain Vineyards Reserve Cabernet Sauvignon- not very dissimilar to its brother above, but with slightly more verve and astringency. The thing is after sitting in the glass for 30 minutes or so it took on more weight and lost the abstinent edge. (I believe it was only bottle in August). Give it a year and this will bloom. Black red fruits with lively acidity and balance; this had a conveyor belt of all things good in Cabernet that I love. Hints of cola, some warm vanilla, some cedar and exotic tea. Well done! 93

The next flights were served with food. 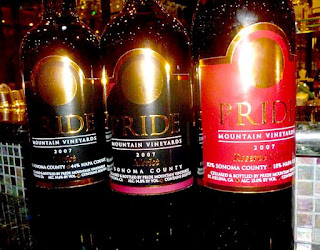 2007 Pride Mountain Vineyards Merlot- pure and red fruited; this had a great roundness to it. Cherries, red plums with some leather and cedar. A nice wine that stands strongly within its QPR status as seen with the next 2 wines. 89 points

2007 Pride Mountain Vineyards Vintner Select Merlot- More serious for sure. A hint of jamminess, this is slightly redder and slightly more structured than is sibling that came before. The nose was slightly more subdued on this. As it sat it became more fragrant and open showing denser chewy tannins and understated acidity. Very nice. 91 points

2007 Pride Mountain Vineyards Claret- Yowsa! Here we go! The breed and elegance hits you immediately. A 70% merlot 30% Cabernet blend. Immense structure with black red fruits that explode sideways and up all at the same time. Mouth-coating with a finely meshed tannic structure, this took command of the flight, a flight that was surely voted along its price-point. This is pure heaven. 94 points 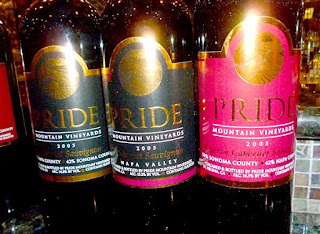 2005 Pride Mountain Vineyards Cabernet Sauvignon- dense, pure and fragrant with hints of coffee bean, cedar and leather. I got some nice black plums, black cherries and some kirsch on this. It was certainly outclassed by the first flight, but held its own nicely in this group. I have always been a fan of these. This whole flight had the true to form Foley nose: creamy vanilla and cocoa. On nose alone, it was hard to distinguish these. The palate tells the story waiting to be told….
91 points

2005 Pride Mountain Vineyards Vintner Select Cabernet Sauvignon- I am onto these guys now. The 2-8% Petit Verdot is KEY to the whole pride CS lineup. This one does not have it being 100% Cabernet. It had a great array of black fruits with currant and blackberry being in control, but what it lacked was the fragrance of the two that bookended it. Dense and slightly tannic, this remained true to its cabernet lineage. A nice cab nonetheless. 90 points

2005 Pride Mountain Vineyards Reserve Cabernet Sauvignon- We have arrived right back where we started---full circle. This had a wonderful pure breed quality that all its brethren had before it. (4.5% PV) Dense, chewy and flamboyant, this had the Foley-esque qualities that became a bit polarizing in the day. Some oak is evident with black tar, leather and tea. This is a medium weight wine with big bones and no excuses; this pleases all the senses above the neck. 94 points 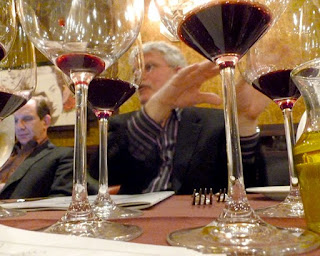