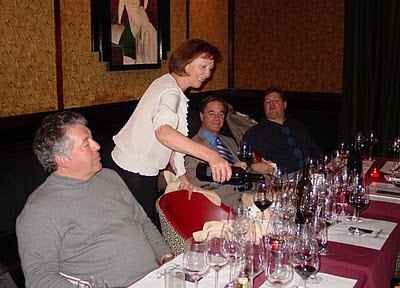 In a time long ago, in the land of NY there was a dinner. Not just any dinner, but a cabernet sauvignon dinner. At this dinner was a bottle of wine that might not have been shown in the best light for reasons I will not go into here. The farmer/grower/proprietor of said wine was a wee bit disappointed with how her wine showed, and rightly so. This was the genesis of last evenings CLONYC dinner where Merrill Lindquist and her wines, EMH Black Cat Cabernet came east to settle the score, and settle she did. Like a gunslinger riding into town at noon, she arrived with a gun full of bullets, 8 vintages of bullets.

Merrill is a gracious and lovely lady who happens to produce a small volume wine, a wine that I have not had the pleasure of trying until that fateful night about 6 months back. it was the '01 Black Cat that had seen too much air. Considering Merrill has less than 12 bottles of this in her cellar (as well as the next three in the line-up), the sacrifice(s) she made for us was huge. I mean, who are we? A bunch of wine loving geeks who, oh yeah, are true lovers of all thing Cabernet Sauvignon. Even our name is silly: Cabernet Lovers Of New York! Who came up with that one?

Okay, okay. Onto the wines!

2001 EMH Black Cat Cabernet Sauvignon- The all neutral oak treatment on this keeps it graceful and pretty. There is some floral notes with red currants, bing cherries and red plum. A very classy wine with a smooth long finish. very nice.

2002 EMH Black Cat Cabernet Sauvignon- This evolved from the get-go. It started a bit muted, but went really pretty and precise very quick. Fantastic structure. More up my alley stylistically. Blacker fruit profile with a medium body of joy and balance. A fine purity and long finish made this an early favorite.

2003 EMH Black Cat Cabernet Sauvignon-This was similar to the 01 in style just a bit muted and soft. there was that usual 03 thing going on, you know, the thing that makes you chose where to go next when the glasses on either side contain the 02 and 04 of the same wine? A nice drink in the context of the vintage.

2004 EMH Black Cat Cabernet Sauvignon- I have always been a fan of this once juicy vintage. This had the similar nose profile that all have carried to this point, and I seen it was a trend. Merrill agreed. When you pick the same fruit from the same 2/3 of an acre I guess similarities are expected. Pretty nose of red and black currants, the palate has a mix of fruits of the red and black variety. Classy and precise, this was a real beauty.

2005 EMH Black Cat Cabernet Sauvignon- Merrill's problem child. Mikes alley.
This was dark and ominous with a burliness and brashness unlike anything else yet. It was very perfumed with so much happening, you need a few hours to follow and get a read. It got darked as it sat. I got some black-cherry cola and leather. This started taming after about 20 minutes and a blueberry popped in! I asked Merrill if there was any rogue Syrah vines hiding in those cab vines. Mikey likey.

2006 EMH Black Cat Cabernet Sauvignon- Somethings gotta give, right? 2006 is a vintage that I really enjoy. This one seemed a bit unstructured than most I have encountered. You are always measured by the company you keep. I commented that it really is not fair to do these types of tastings because any wine like this 06 that would be lovely and welcomed at the table if alone, just sits in the shadows.

2007 EMH Black Cat Cabernet Sauvignon- This is the one I really wanted to try. With all the talk of 07 cab this, 07 cab that, I wanted to see what cab is like in Merrill's EMH part of the world. It was fantastic. With her style leaning in this 'could be blowsy' vintage, she has nailed it. Multi layered goodness with purity, balance and structure. Elegant black and red fruits surrounded by plushness and love. The 2 hour decant really did wonders as the second bottle on pop and pour was a bit more subdued, but opened slowly in my glass. There was some vanilla present among some lead pencil shavings and soy. I think after the 01, this is the wine Merrill really wanted to read my face with. well done there my lady!

2008 EMH Black Cat Cabernet Sauvignon- tough to read in its youth. It was primary and closed. Interestingly enough, on second bottle this shined with pop and pour! Its a pretty wine with the EMH nose. Lots of spring flowers with a cornucopia of red and black fruits. There was some cedar box and exotic tea. A very tightly wound wine with a narrow line of attack, I can see this evolving into something really special with 2 years in the bottle more. 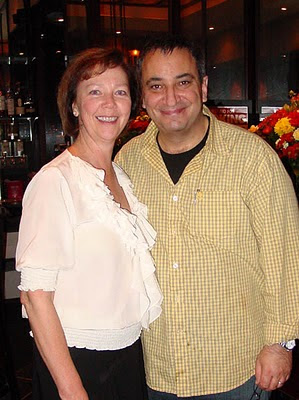 All the wines were opened save for a few dupes after dinner (2 mentioned above).
The 01 and 02 were not decanted but everything else was. 5pm.

I want to thank Merrill for her tenacity and wherewithal to deal with us loud but pretty harmless group of guys. There was many laughs for sure. Merrill is a very dedicated lady who wants to make sure her babies are enjoyed as the deserve to be, and there's nothing wrong with that. I love passion.