The wine gods must love this tasting group. About eight months ago, winemaker Mike Hirby and I chatted about the possibility of doing this dinner/tasting for the CLONYC gang. On Monday, November 23rd, 2009, that chat bore it's fruit. 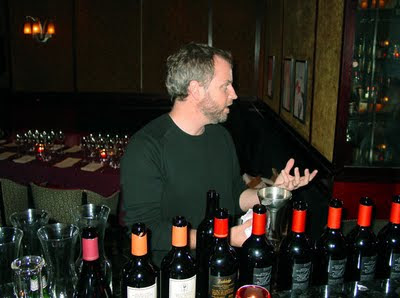 If you ever get the opportunity to meet with Mike, and taste his wines, you would sure consider yourself lucky too. He is a one of the most easy going humble & downright friendliest guys I know, who just happens to make amazing wines! Mike brought us a dozen or so wines to sample. I have always been a fan of his Realm wines, and the 2007s are really the schnizzle they have been hyped to be. Mike’s own label, Relic was well represented as well. Great fruit sources and a very imaginative winemaker can lead to some fantastically wonderful wines. Wines which paint sometimes seems to spill out of the box, as in the example of The Sage, his white blend (44% Chardonnay, 22% Viognier, 22% Roussanne, and 12% Marsanne) proved. I would like to thank Mike for his generosity and graciousness in coming east to meet with this humble group of wine-lovers. We are lucky beyond belief to be able to have amongst us such talented and just downright nice winemakers, like Mike who share our passion. A very very great night! The staff at North Square outdid themselves once again. Great food and service. I am so glad that CLONYC has a new home. 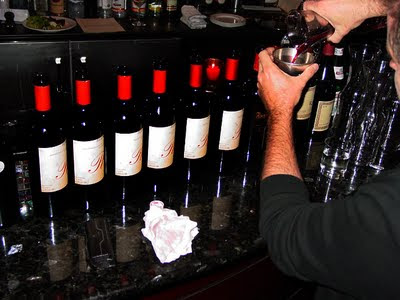 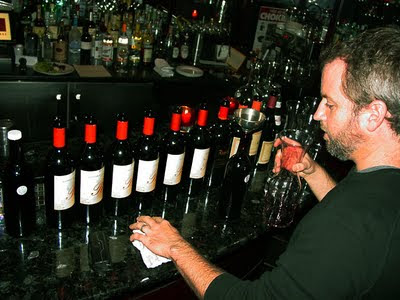 1971 Ch Haut Brion Blanc- Mark was kind enough to bring this. A very lively wine with hints of its former self showing like a veiled senior citizen. Some fruit, some acid, some life. Great light-salmon color. A bit short and maybe a wee bit simple, but enjoyable nonetheless. 2008 Relic The Sage- I really enjoyed the dimension and profile of this. I get the Euro influence Mike said he was seeking.. The nose was all citrus, apricots and tall grass. A deft balance with some extra character filled nuances coming toward the end. I take it the Roussanne and Marsanne were making themselves known. Beautiful. Beyond this point, all reds double decanted back into thier own bottle-- 2.5 hours early. 2008 Relic Pinot Noir Sonoma Coast- My short experienced self (on Sonoma Pinot) welcomed this one. The nose had loads of cherries & cola some wild flowers. Very interesting as it sat in the glass.. A very pretty wine that revealed the Bing cherry, cola, and a hint of earth. I loved the character and tight-rope balance this showed. One that Mike said only gets better in 2009. I only ask….how? 2007 Relic Artefact- (96% CS, 2% PV, 2% Syrah) what an amazing wine. The nose was singing of all good things to come. Black fruits rule the night and this is the opening act: Dense and plush with currant, black cherries, plums and vanilla. A deeply complex serious wine that changes moment to moment. What an interesting wine! 2007 Relic Cabernet Sauvignon Rockledge Vineyard- I have been a fan of the Rockledge Vineyards stuff for a few years now. Mike now gets that fruit for his own label. This was dark and brooding. The nose was restrained. On the palate this is as serious as a heart attack. Dark, dense, cassis and black cherry driven, this is a bit tannic and unyielding. Plush and masculine, with a long black filled fruit finish. A fantastic wine that wears its name like a badge of honor. I love it. 2004 Rockledge Vineyards The Rocks- For a bit of contrast. What contrast? This is as dark and muscular as the 2007, and even more wrapped in tannins if possible. A similar profile to the 2007 as well. This is a staple in my cellar, one I ‘go to’ when I want to remember why I will always love Napa Cabs—as if I need reminding. 2007 Realm The Tempest- The tempest and I are like a bickering couple: sometimes we see eye to eye, but more times not. Strangely, the year it was cab heavy (2005?) was that one time we did. Medium weight and reddish black profile, there was great structure and finesse. It's just that damn Merlot that gets in the way… 2007 Realm ‘The Falstaff’- Cab Franc blend. This is a head spinner and eye popper! Super aromatics with loads of black and blue fruits. Some plums, some black cherries, and some camphor. I loved it. It is one you can sit with all night long and never get tired of. Elegance and pizzazz all in one. A no brainier buy. 2007 Realm ‘the Bard’- Usually not in my top group as well, this years is exceptional. A dark fruited currant/cassis/kirsch profile with a beautiful vanilla nose that is all joy. What a pretty and graceful wine. Wow! 2007 Realm Farella- These designates are always so great to taste alongside one another. This has all the Farella stuffing I am used to with a bit more elegance and style that I can remember, broaching toward the Crane territory. Great balance and length. Very nice indeed. 2007 Realm Beckstoffer Dr Crane- How do you spell WOW. This is all I ever remember it to be, but better. How the hell can this be so? Dark, brooding, intense, aromatic, elegant, muscular, balance, length, potential, love. This changed in 15 minutes to be even more of what I just said: more dark, more brooding……A cabernet drinker’s cabernet. Want to make someone happy? Buy them one of these. I…say….no….more. 2007 Realm Beckstoffer To Kalon- Always the crowd pleaser, this again brings it to new heights. Always vying neck and neck with the Crane for first place, you need a photo finish for this race. Dark and ominous, this has tons of character and structure, with gobs of the blackest fruits known to man. We need another word for ‘blackest fruits’—ok….we need 2 new words. 2008 Relic Rockledge Vineyard barrel sample- Mikes’ term for picking some of these 08’s was ‘picking sweet’. I never heard the term myself until last night. This is a pure and clean expression of a super young un-bottled. The stuffing is all there, its just all covered with the baby fat. Sure, it’s a bit primary, but a red/black fruit profile is in there somewhere. I will love to sample this after it’s been under cork for 6 months. 2008 Realm Dr Crane barrel sample- similar to the Relic, but a bit less primary, and slightly more characters peeking through. A sweet fruit profile which I really enjoy. Chewy, luscious and exotic. The class is evident. Again, let’s see where we go with this. Mike spoke of the difficulties encountered in 2008. Time will tell. 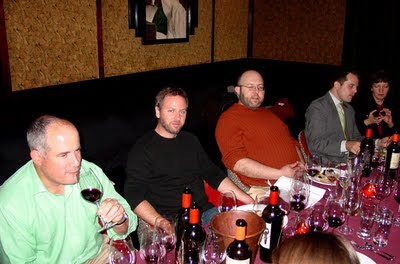 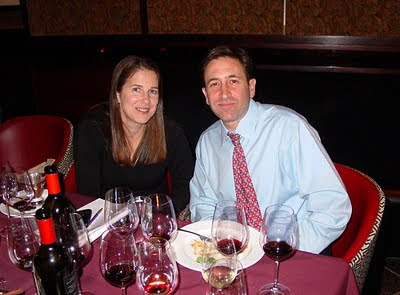 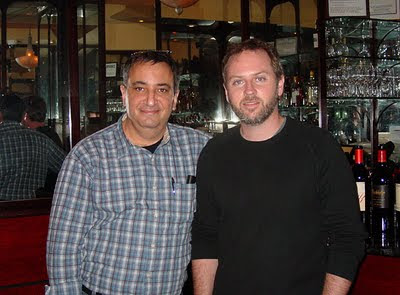